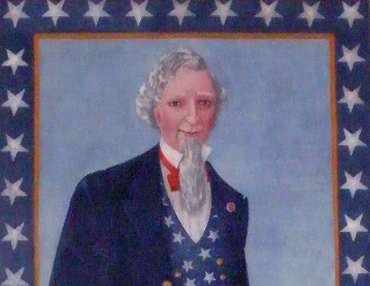 The Museum is privileged and honored to be able to display, a bigger than life, 8’ X 3’ painting of “Uncle Sam”.  The painting is loan from local resident, Joan Bachhuber.  After being in storage for many  years and with the new found patriotism of the country,  Joan felt it should be put on display for other people to enjoy.  The story line states the painting had previously hung in a theater in St. Louis, Missouri in the early 1900’s.

Approximately in 1970, Joan found the painting at an antique store in Oconomowoc.  She purchased the painting and presented it to her husband, Bill, for Father’s Day.  Throughout the years “Uncle Sam” had made brief appearances in their home and business, Bill’s Rexall Pharmacy, which was located at 35 South Main Street in Mayville.  Because the painting was stored for many years, wrapped tightly around two wooden dowels, it developed some tears in the canvas along with grime which had accumulated.  In 1990, Bill showed the painting to Mike Bath, a local gentleman, involved with historical restorations at the State Capitol in Madison.  Mike presented the painting to Anton Rajer, the Art conservator in charge of art restoration at the Capitol.  Upon researching the origin of the work of art, Rajer concluded that it was indeed a good authentic example of World War I patriotic art, and as such, deserved to be restored and preserved.

Bill and Joan commissioned Rajer to restore the painting.  After the three-month restoration project was completed in June of 1991, they again displayed the painting for viewing at their place of business, from July 1st through July 3rd of that year.  After Bill’s untimely death in 1993, the painting was again put in storage.