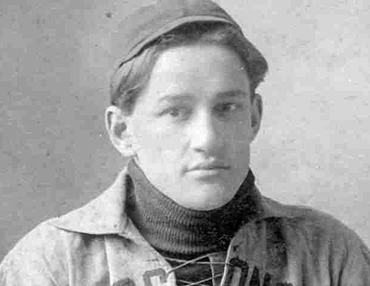 Berthold “Pete” Husting was born in Mayville, March 6, 1878, to Jean Pierre and Mary Magdelene Husting.  After graduating from Mayville High School, which at the time was in located in the museum’s large upstairs room, now known as the Grand Auditorium, Pete received his law degree at UW-Madison.  While at Madison he was the pitcher for the UW baseball team in 1898 and led the team to the Western Conference Championship.  He pitched in 1901 for the old Milwaukee Brewers.  In 1902, he played for the Philadelphia Athletics.  He also played for Boston and Pittsburgh.

After three seasons in the big leagues, he left baseball to pursue a career in law.  In later years, he was appointed U.S. attorney for the Eastern District. Husting took an active part in the fight to open the Horicon Marsh for public hunting, and later helped the landowners with their fight to proper compensation for the lands used for the wildlife preserve.

Pete had a lifelong friendship with the great Connie Mack who sent roses to Husting’s funeral when Pete died suddenly in 1948.  He is buried in Graceland Cemetery.

Baseball historian, Dave Stalker, of Watertown, was instrumental in arranging for the installation, which honors players from what is known as the Deadball Era, 1901-1919.